For decades, harsh chemicals have been poured into pool waters in order to render otherwise harmful microorganisms and bacteria oxidized and harmless. Of these chemicals, chlorine is used the most often, and its unpleasant effects have soured summer fun for children and adults alike. Red eyes, itchy dry skin, bleached hair, and an inescapable odor have placed an unhappy shadow on what should always be fun and refreshing.

Today, it is a socially accepted norm to wash yourself off after a dunk in a pool, but this widely practiced habit does not make any sense. If chlorine makes pool water safe and clean, why should a swimmer need to wash off in order to feel clean afterward? New breakthroughs in pool maintenance have finally brought a solution to the market that can reduce the unpleasant side effects and make your summer fun in every aspect.

For millennia, copper has been used in order to optimize the purification of water. The Ancient Greeks were the very first to discover the purifying properties copper has when introduced to water. In ancient Egypt, Egyptians kept their water in special silver containers that prevented contamination without the added effects of a harsh chemical. Silver flagons were utilized during Greek military excursions in order to keep water fresh and safe to drink over the course of the long trek. What do all of these examples have in common? Copper and silver. A pool ionization system is used in order to keep water clean in much the same way as these ancient people.

Copper and silver ions work to kill different hazards. Copper is used in order to halt the growth of algae, while silver ions leave bacteria and viruses dead in the water. These combined ions are the perfect solution to your chlorine troubles. The copper is released into the water in order to remove the unpleasant odors and taste of chlorine that pool goers have grown accustomed to, and the silver is released to cut down on bacteria growth.

How Ionization Systems Work in Your Pool’s Favor

A pool ionization system employs a microprocessor control box and a set of electrodes composed of alloyed copper and silver. Water is then passed through the flow cell chamber. In order to create positive ions, a low-voltage DC current is introduced. These released copper and silver ions then get to work sanitizing your pool against potentially harmful microorganisms and bacteria. Say goodbye to the annoying side effects of chlorine, and embrace the simple pleasure of naturally clean, safe water. Never allow your pool to reduce summer fun again—go online now to research these brand new pool ionization systems. 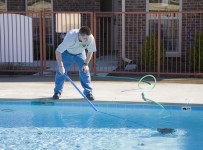